Unless you’ve been living under a rock, you probably know that the current state of energy consumption is pretty dire. The main problem is that we’ve been relying on fossil fuels for far too long. With so many gas-guzzling vehicles on the road in the US (not to mention Los Angeles and Southern California alone), we’re burning millions of gallons of fossil fuel every year. Petroleum-based fuels like gasoline come from somewhere, and we’ve been tapping oil reserves both at home and abroad for that bubbling crude for such a long time that scarcity is going to be a major problem soon.

While it’s certainly a major concern, there’s more to worry about than just running out of fossil fuels, of course. The results of burning fossil fuels to generate energy are contributing to major upheavals to our environment as well, as the air pollution created by burning oil, gasoline, and other fossil fuels contributes to climate change. With climate change leading to widespread environmental damage due to the aftereffects of increased global temperatures like increased flooding and more energetic weather conditions, it’s even more important to reduce our reliance on fossil fuels as quickly as possible.

Electric vehicles are the way of the future. There’s just no question about that, as they offer so many advantages over gasoline-powered vehicles. EVs don’t contribute to climate change as they don’t run on fossil fuels, they don’t create nearly as much noise pollution as a gas engine, and they require less frequent (and less expensive) maintenance. Not only that, but there are plenty of incentives like tax credits for owning an electric vehicle!

All of this makes EVs pretty much perfect. The only downside is keeping your EV on the road as long as possible when you’re not at home. For this, you need to find an EV charging station close to where you’re going to extend the range of your EV. There are plenty of places that have EV charging stations nowadays, such as the parking lots of supermarkets and shopping malls, but for EVs to really take off, we need more EV charging stations installed – it’s just a fact. Thankfully, there’s help on the horizon.

Calling In the Big Guns

In March of 2021, President Biden announced that the US federal government intends to put its full weight behind electric vehicles in a major way. In fact, his $2 trillion infrastructure bill calls for 500,000 EV charging stations installed across the United States by 2030. This will be a major plus for EV owners who want to be able to use their vehicles more often. Not only that, however, but increasing the number of charging stations in the US means countless jobs created in installing and servicing these charging stations – something we know more than a little bit about here at Volticity, after all; we pride ourselves in being trustworthy EV charging station installers!

Most electric vehicles are charged at outlets in the home, such as in the garage. It’s estimated that there are close to 100,000 households in the US that have charging outlets of this type. Yet EV charging stations outside the home are much rarer; as of February 2021, there were only around 40,000 charging stations according to Statista. This means there’s a lot of work to be done in expanding EV charging stations across this great country of ours if we’re going to reach that 500,000 station goal by the end of the decade. If we can reach this goal, however, think of the difference it will make in the life of the average American!

Without a doubt, increasing the number of electric vehicle charging stations across the US will lead to some major positive changes for Americans. If you see charging stations wherever you go, you’re more likely to consider buying an electric vehicle in the future after all – and that means the number of cars on the road burning fossil fuels will go down by a sizable margin. Having a major percentage of car owners not having to frequent gas stations means good news for traditional car owners, too – decreased demand is likely to drive gas prices down as well.

But the real benefit is that we’ll be making strides towards true energy independence. With cars running off electricity, we no longer have to worry about depending on fossil fuels to generate that electricity. Instead, we can push for more renewable electricity generation through wind, solar, and hydroelectric methods instead of using oil-fired electric power generation, reducing air pollution and its effects on climate change even further. Much like increasing our electric vehicle charging station network, increasing our renewable power generation infrastructure is going to be a major endeavor – one that will lead to more opportunities for people to earn a living. Not only that, but people with better jobs can afford better cars, especially ones that run on electricity!

Is it time to throw off the shackles of fossil fuels, reduce the damage we’re doing to our own planet, and create a world that provides plenty of ways to live by harnessing renewable energy generation? We certainly think so, or else we would have never gotten into this line of business. The first step down this road is absolutely increasing the number of electric vehicle charging stations available to consumers today.

Here in California, (namely Los Angeles, Orange County, San Diego), we’re ahead of the game, but there’s always more work to be done. You can rely on us here at Volticity to lead the charge towards increasing the number of EV charging stations in the regions we service. We’re not just working to make the world a better place for those of us who own electric vehicles – we can work together to make everything better for everyone. Reach out today to get a free quote for an EV charging station installation.

How DC Fast Chargers Can Benefit Your Business

Almost 25% of vehicle sales will be electric by 2025! If you are an organization/company/business,…

So you have an electric vehicle (EV), or are thinking of purchasing one. But you…

The 3 Types of EV Charging 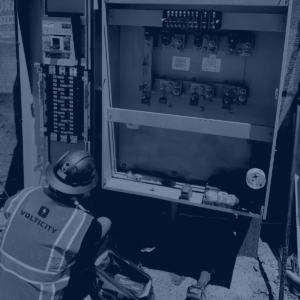 Over 3 Decades of Speciality Electrical Experience

OUR COMMITMENT
Volticity aims to serve you with personal, quality customer service. We’re committed to your project.

You are going to love our service and response time.

If you’re not completely satisfied, let us know and we will make it right. Your job is as important to us as it is to you. We’re looking forward to servicing your next project.

Our mission & commitment is to provide our partners with the best in turnkey, personal quality service and satisfaction.
Get In Touch